Distinguish Between Felony , Crime And Misdemeanor 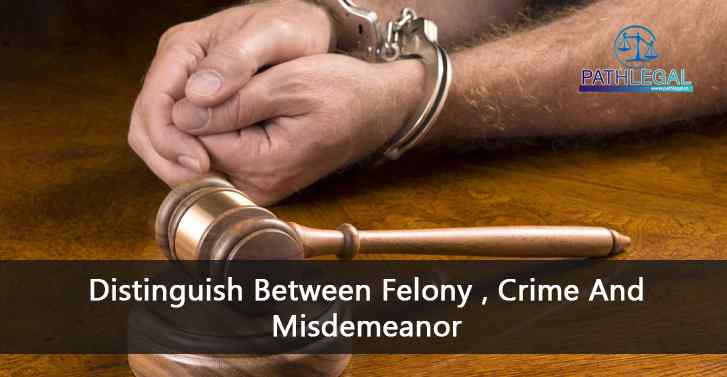 The terms â felony â , âcrime â and âmisdemeanourâ can put us in a confusion . To clear that , let us see the difference between the three different terms which can help us in having a clear idea of each term. So here are the following :

Felony is a crime which is of grave nature and committing felony can lead to imprisonment for longer terms and fines. Felony can either be a violent one or non-violent type. Punishments may differ for felony depending upon the law of the area.

Rape , child abuse , attempt to murder , money laundering crimes are some instances of felony. A crime is considered as felony when harm caused is severe or grave in nature , if dangerous weapon was used for the commission of the crime , depends on the point of view of community and court regarding that particular crime committed and if the person who committed the crime has already undergone conviction .

It is an act or omission that causes a wrongdoing or an offence and the law can punish for the wrongdoing or offence. The punishment usually involves jail terms or imprisonment and fine. In short , crime is an act which is unlawful.

The ingredients of crime :-(1) âmens rea â(2)Â  âactus reus â. For an act to be considered as a crime , these two elements have to be present and have to act together. âMens Reaâ is the intention to commit the crime while âactus reus â is the human act which is criminal in nature .

There are crimes related to property , white-collar and corporate crimes , violent crimes and so on. Some examples of crimes are murder , domestic violence , rape , burglary .

Victims of crimes have to live through the rest of their life with psychological effects which may be depression , trauma .

Misdemeanors are those crimes which are not that grave as felonyÂ  but does involve imprisonment and may be even fine . Misdemeanor can be shoplifting , trespassing , rash driving are some of the common instances.

Sometimes , the person committing misdemeanour must have done out of coercion or as a self-defence . There are crimes where there is no sufficient evidence to support that such a crime has happened. Also , there is a possibility that the person committing crime must have committed the crime when under the influence of consuming any particular thing.