Important Legal Maxims That Every Law Student Must Know 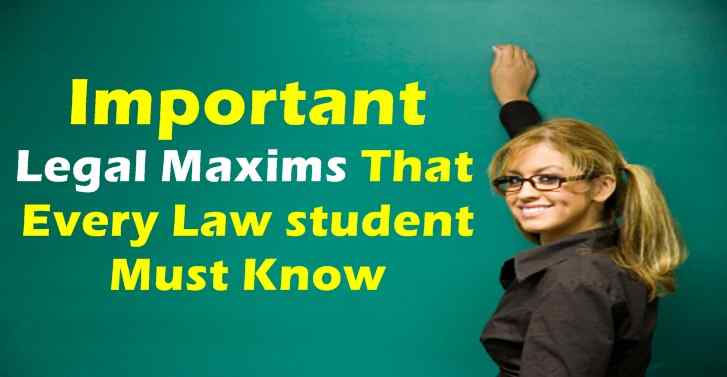 LEGAL MAXIM
A legal maxim is an established principle or proposition. Most of the Latin maxims developed in the Medieval era in European countries that used Latin as their language for law and courts.

1)DAMNUM SINE INJURIA : Damage without injuryÂ
Here damnum means damage, sine means without and injuria means injury.Â
In this maxim, there is no infringement of the legal right of the person, so he is not entitled to get compensation for this.
For eg: If AÂ  has opened a school nearby to the school of B, then there is no violation of the legal right of A, so he will not be compensated for this.

2) ACTUS NON FACIT REUM, NISI MENS SIT REA
The act does not make a man guilty unless his mind was so. It emphasis on INTENT +Â  ACT =Â  CRIME.Â  For an act to be criminal,Â  it must be committed with a guilty mind.
The maxim is an important concept of the Indian penal code with respect to elements of the crime.

5) UBI JUS LBI REMEDIUM
Where there is right there is the remedy. The maxim is applicable only where the " LEGAL " right exists.A wrongful act must have been done, which violated someone 's legal right clearly. The latin maxim can be applied only where the law does not provide either any relief or provides insufficient relief.
6) ACTIO PERSONALIS MORITUR CUM PERSONA
A personal right of action dies with the person.Â  Any action that purely relates to the private or personal character of the person comes to an end upon his / her death. For eg : Defamation of character. This is applicable only in tort laws.

7) Ratio DecidendiÂ
It is a Latin phrase meaning " the reason " or " the rationale for the decision ".
The ratio decidendi is " The point in a case which determines the judgement " or " the principle which the case establishes ". It is one of the most powerful tools available to a lawyer.Â
It is the legal rule derived from those parts of legal reasoning within a judgement on which the outcome of the case depends.

8) OBITUR DICTUMÂ
An obiter dictum is a remark or observation made by a judge that, although included in the body of the court's opinion, doesn't form a necessary part of the court's decision.Â
Unlike the rationes decidendi, obiter dicta are not the subject of the judicial decision, even if they happen to be correct statements of law.

9) IGNORANTIAÂ  JURIS NON EXCUSAT
Ignorance of the law is not an excuseÂ
There is two types of mistake in IPC. The mistake of fact and mistake of law.
Â Under the mistake of law every one both subjects and foreigners are bound to know the law of the land.Â

10) CAVEAT EMPTOR
Let the buyer be awareÂ
The rule protects the seller and is unfavorable to the buyer.
The buyer can't recover damages for defects rendering property unfit.
The only exception is the seller intentionally concealed the latent defects or otherwise, made material misrepresentations, amounting to fraud.

Note:- We try our level best to avoid any kind of abusive content posted by users. Kindly report to us if you notice any. This report may be copied from a news/channel/magazine/blog/site for knowledge sharing, where PathLegal DISCLAIM any ownership of the content posted and offer NO warranty about the data. In case of any objection, please do write to [email protected]